You may or may not know that I have a slight planner obsession. Yes, I’m talking pen and paper planner. I’ve tried “going digital” several times over the years, but there’s just something about writing out my plans that I love. I absolutely love my Erin Condren Life Planner, which I’ve been using for the last few years. I even have a separate Instagram account set up for my planning snapshots.

Recently, however, I’ve been intrigued by the bullet journal craze. What’s a bullet journal, you ask? The creator of the system, Ryder Carroll, defines it as follows:

“The Bullet Journal is a customizable and forgiving organization system. It can be your to-do list, sketchbook, notebook, and diary, but most likely, it will be all of the above. It will teach you to do more with less.”

Of course, I googled it. What comes up will blow your mind… it’s so much more than just a bulleted list (but it can be just that if that’s what you want it to be!).

I decided to dive right in and see what bullet journaling was all about… I ordered my sunshine yellow dot grid Leuchtturm 1917 notebook on Amazon (tip: these suckers are HOT! If you decide to get one, Amazon seems to be the place to go as most retail outlets and some of the online ones are sold out). I chose the Leuchtturm over the Moleskine after reading a bunch of reviews that said that the Moleskine ghosted (you can see the show of the writing on the next page) or bled through more often. I’m really happy with my choice… the paper quality is amazing! The dot grid version was also essential… it’s basically graph paper, but without the connecting lines (just a dot in each of the four quarters). It allows you to write as if you had a line (straight line writing for those of us who have OCD!)  and to draw. 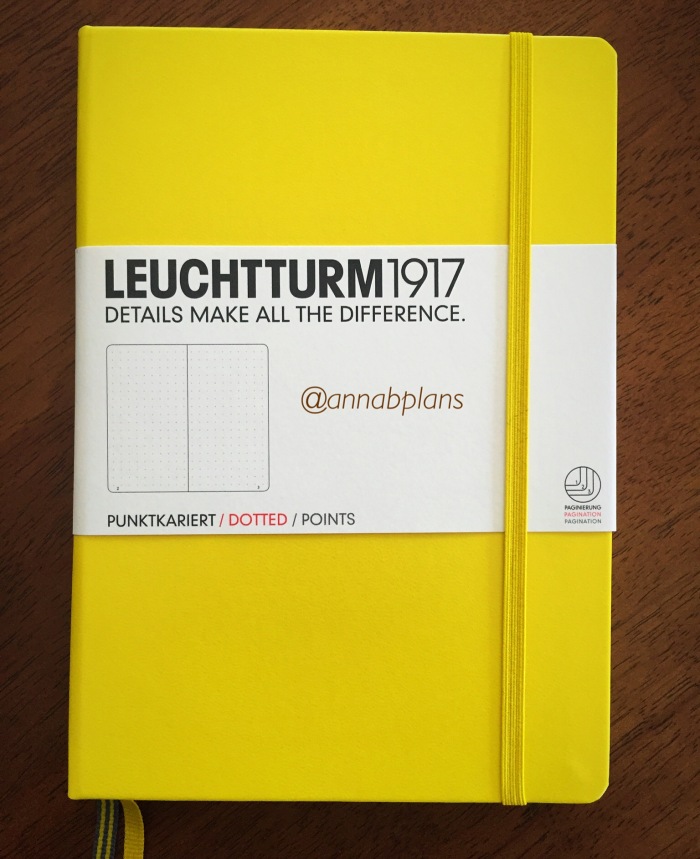 Here’s the premise of the bullet journaling system – use the least amount of effort so that it does not become a chore. Which is going to completely contradict when I show you what I actually did in mine. But that’s ok, because the idea is that you can be crazy into it one week and “slack off” the next. The other appealing part to me is that you can change your weekly (or daily) layout as often as you want. Don’t like how you organized yourself this week? Turn the page to a blank page and make it different for next week! The possibilities are endless!

The whole system starts with the future log… essentially, it’s your calendar for the next 6 months. This is the place that you come to write everything down. Dentist appointment in December? Circle the date and write it down. You’ll have a chance to create monthly calendars, so this space doesn’t have to be anything fancy. In fact, your monthly calendar doesn’t have to be fancy either – lots of people just write the dates down the side and put the appointments on the corresponding line. I enjoy a good monthly calendar, so I drew mine out and added some goal tracking. 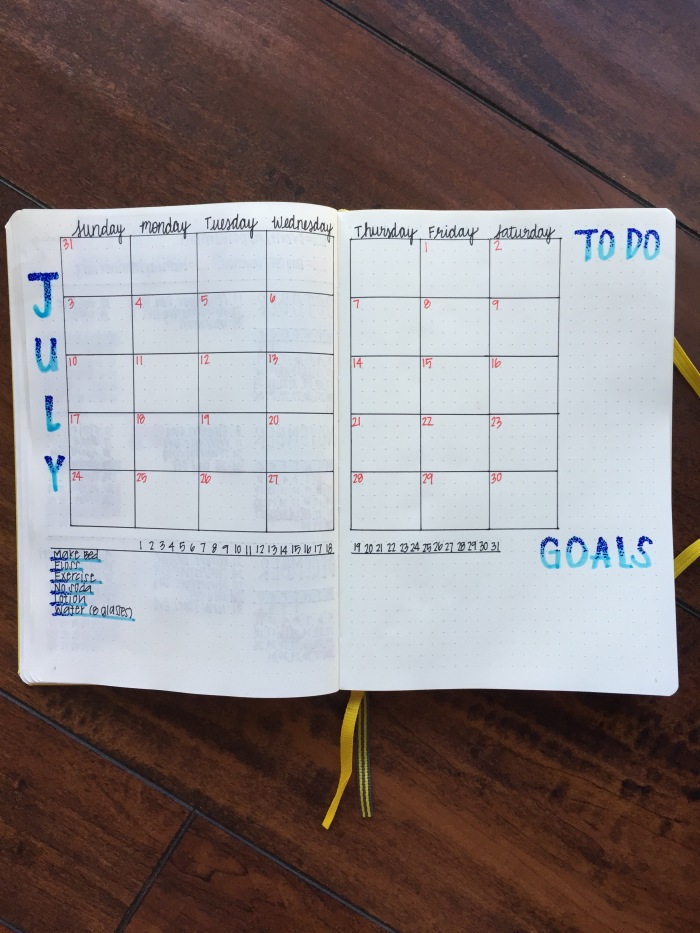 After that, you can basically do whatever you want! I started with a page that I labelled “July memories” where I’ll draw, write, etc to remember things that happened in July. I followed that up with a page called “Books to Read”. I stole an idea from basically everyone who has a bullet journal and drew a somewhat cute little bookcase with the names of books I want to read on the little books. I’ll color them in once I’m done with them.

I followed that up with another calendar. Why you ask? Well, there’s a bunch of folks who do a monthly doodle “challenge” – the idea is that they give a prompt and you draw something in each day’s box. Drawing has never been my forte, but I like the idea of working on it!

Finally, I dove into my weekly spreads. This is where the rubber meets the road in the bullet journal. Again, the idea is that it has to be functional for you… if it’s not, change it!

Here’s one of the different weekly layouts that I will be experimenting with over the month of July:

For those who freak out when everything is not perfectly in order, there is an indexing system at the front that you use to identify where your calendars, weekly logs, collections, etc are so you can always flip the correct page. I’m still having a hard time with that (thus I did the next 4 weeks layout), but am going to give it the college try in August. There are so many other things you can do in the bullet journal – actual journaling, meal planning, drawing or sketching, and more!

I haven’t bought my 2017 planner yet (even though Erin Condren launched in early June) and I might hold off even longer… I am very much enjoying the creativity and flexibility of the bullet journal!